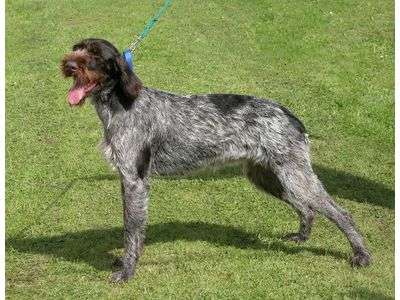 The Bohemian Rauhbart, also known as the Cesky Fousek in its Czech homeland, lives up to its name. Typical for this medium-sized breed is the long beard, which is formed around lips and lower jaws. The original hunting and priming dog had already become extinct when it was re-cultivated in the 1980s. For this reason the modern Fousek looks very similar to the crossed German Drahthaar.

The Bohemian Roughbeard is a primitive dog with rough hair, which can only be found isolated outside his native country. Until the First World War he was a popular and very versatile hunting and working dog. Through the war, he then fell into oblivion and then completely disappeared. After the Korthals-Griffon almost ceased to exist in the Czech Republic at the beginning of the 1980s, the efforts were made to rebuild the Bohemian Rauhbart. The initial breeds were the Korthals-Griffon, Deutschstichelhaar and Deutsch Drahthaar as well as possibly also German short hair, whereby this intersection can not be reliably occupied. It is no wonder, then, that the Fousek (as this breed is fondly called by its lovers) looks very similar to the German Drahthaar.

The Bohemian Rauhbart or Cesky Fousek is one of the medium sized dog breeds. The back is comparatively short, but is lengthened by a long and moderately falling croup. The chest should be oval-shaped and leave a harmonious overall impression together with the rest of the body's features. When viewed from the side, the sternum is clearly visible. The shoulders are positioned at an angle and are characterized by a well-developed musculature. The abdomen should be reared, but must not give the impression of leanness. The retracted abdomen allows the right movement. The tail is set as an extension of the back line. It should be carried horizontally or only slightly lifted. Dogs are between 60 and 66 centimeters high, bitches between 58 and 62 centimeters. The weight, depending on size, is between 27 and 34 kilograms. The hair is composed of three hair types. The dense and soft underwear is about 1.5 centimeters long and should prevent moisture from penetrating to the skin. The underwear falls out in summer. The hard and rough top coat is closely related. It is between three and four inches long. The gauges are between five and seven centimeters long and are distinguished by a special hardness. They are particularly prominent on the front, the shoulders, the points and the back line. On longer lips and lower jaws, longer and softer hairs form the named beard. The following colors are permitted according to the standard:

The Bohemian Rauhbart is registered under the number 245 in the FCI,

The Fousek is a friendly, easy-to-handle dog, which is used both on land, in field and forest as well as in water for the projection and retrieving work. It is therefore very versatile and is appreciated in its home as a reliable hunting companion. In addition, he is a quiet householder and also a pleasant familydog.

The gender-specific differences in size are often quite pronounced. Originally these dogs, which were almost exclusively hunted, the tail was docked by about a third or even half. Due to the ban on rutting down in different countries today one also sees more frequently with long rod.