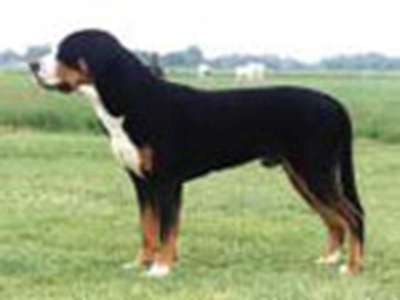 The Great Swiss Mountain dog, affectionately known as "Swissy" is a breed that originated in the Swiss Alps. In German, its name is "Sennenhund" and "senn" refers to the dairymen or herders that used these magnificent beasts. Towards the end of the nineteenth century, it was believed that these dogs had all but died out, as machinery increasingly took over from their original work, but the breed was rediscovered in the early years of the twentieth century. Originally used as a working farm dog, it is characterised by a large size, stocky appearance and incredible strength. Albert Heim, one of the earliest and keenest members of the Swiss Kennel Club took great interest in preserving the strain and encouraged enthusiasts to breed.

The Great Swiss Mountain dog was first recognized as a separate breed by the Swiss Kennel club in 1909. In 1912, the first breeding club was formed to actively promote the continuation of the breed.

In the Second World War, the intelligence of Swiss Mountain dogs came into play as they were used in military service as draft dogs by the Swiss Army.

The breed first achieved international recognition in 1939, when the Fédération Cynologique Internationale first published the Swiss Standard. J. Frederick and Patricia Hoffman brought the very first Great Swiss Mountain Dogs to America in 1968, and shortly afterwards the Great Swiss Mountain Dog Club of America was established; it remains a club that strives to maintain the steady and selective breeding that is essential to increase the breed's resilience, robustness and popularity.

The club has grown from strength to strength, and the Great Swiss Mountain dog is now the 88th most popular breed in the USA.

The Great Swiss Mountain dog has a short-haired, thick coat that has three main colours of white, black and russet. It is the largest of the four types of Swiss Mountain dogs and is favoured for its lack of health problems that are common for dogs of its size.

The top of its head is flat; its eyes tend to have a rather almond-like shape, and the ears should be rounded and flop downwards. The muzzle is large, straight, and there should be no drooling! The tail is thick, long and tapers to a point at its end. The shoulders of the breed are muscular and strong as are its hindquarters and forequarters. Above all, the Great Swiss Mountain Dog is characterised by an alert, intelligent and friendly expression.

Health Problems Common to the Breed

Unfortunately, as with all breeds, there are certain health problems to particularly watch out for in Great Swiss Mountain dogs. Fortunately, most of them are relatively minor and can easily be treated. They include urinary incontinence, which is especially common in females after spaying; eyelash problems, where excessive eyelashes grow to the eyelid and "Lick Fit", a condition characterized by frantic bouts of licking. Small and regular meals are one way of treating the problem- to ensure that the dog's stomach is never empty.

As a heavy breed, the lifespan of the Great Swiss Mountain dog is shorter that smaller species. They can be expected to live to about the age of ten or eleven. One thing is sure though, these wonderful dogs, with the right care and attention, make unforgettable family pets.