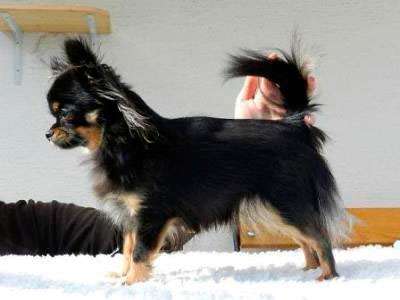 Chihuahuas are the smallest breed of dog and often weigh no more than 2 or 3lbs; they have a breed classification of toy dog or companion dog. They are ideal for apartment living and make perfect house-dogs, although they are very sociable and do not like to be left home alone for long periods. Despite their tiny size, they have very large personalities and are intelligent, affectionate and fearless. These positive personality traits can also lead them to become highly-strung, nippy and yappy if they not given firm but gentle training from a young age. They are an extremely affectionate dog and will display complete devotion to their owners and close family members but usually dislike strangers. They are ideal for elderly owners and can make good family pets but due to their tiny size can be injured by small children.

Chihuahuas are named after the Mexican city of the same name and they are native to Mexico. Their history is disputed, with some saying they date back to the Aztec period, others saying they came to the Americas from China via the Bering Straits and some suggesting that they were brought to Mexico by the Spanish Conquistadors. Another theory is that they are descended from the Fennec Fox, an African mammal that very much resembles the Chihuahua. They first became known to North American tourists in the mid-19th century and were registered by the American Kennel Club in 1904. Today, they are one of the most popular pedigree dog breeds, with over 20,000 registered by the AKC each year.

Adult Chihuahuas have a height of between 6-9 inches and weigh from 2 to 6 lbs. They have a lifespan of 12 to 20 years, with larger dogs usually enjoying a longer life than extremely tiny Chihuahuas. Their bodies are small and stocky, with a straight back and a small tail that is usually carried high and curled over. They have an apple-shaped head and large, rounded, dark eyes, a short, pointed muzzle and very large ears which are placed on top of the head. The feet are small with toes that are slightly spread. The breed has two lengths of coat: long coated and smooth coated, which can be any solid or mixed colour, although black and tan markings are the most common.

Chihuahuas are one of the most popular ‘purse puppies;’ tiny dogs that are carried around in the handbags of celebrities and socialites. Some of the most famous are Paris Hilton’s dog, Tinker Bell, and Bruiser, Reese Witherspoon’s Chihuahua in the film Legally Blonde. Their tiny, toy like appearance often leads them to be spoiled and pampered, which can lead to personality problems. Instead, owners should give consistent rules and gentle training with lots of positive reinforcement in order to benefit from their intelligence and loyalty. Chihuahuas are prone to obesity as they are often fed too much food for their tiny bodies and they have a tendency to several genetic health problems, including eye disorders and luxating patellas, a displacement of the kneecap. Chihuahuas need very little exercise but they are energetic and playful. One daily walk will be enough, but they do suffer from the cold so require a sweater or coat on winter walks. Chihuahuas can be confrontational with strange dogs and will not back down from even the largest opponent, so owners should not leave them unsupervised with other dogs and need to be prepared to remove them from any conflict.