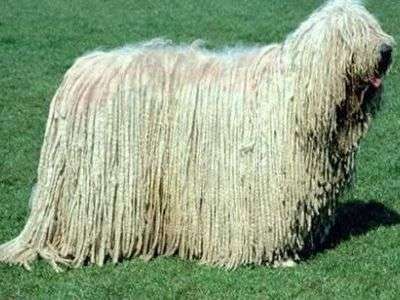 The Komondor has the heaviest coat of any dog breed. When the Komondor is a puppy it has soft, fluffy white fur. As the dog matures, it’s fur begins to curl and its soft undercoat combines with the rougher outer coat to create cords. These cords form naturally, but they do need to be manually separated as they grow, to prevent matting and help their formation. This thick coat was designed to protect the Komondor from bites from wolves and bears, and almost acts as armour for the dog.

Strong and independent, the Komondor has a strong guardian instinct. It is a very protective breed, which is protective over those in its household and wary of strangers. This breed is very affectionate and loyal to its family, and generally has a calm disposition. While they are generally a calm breed, if they feel that there is trouble, they will fiercely protect their family. If properly trained and socialized, the Komondor will accept strangers when they realize that no trouble or harm is going to occur. Due to its past as a guard dog, the Komondor has a dominant and independent personality, and may make decisions on its own. Like all dogs, the Komondor needs plenty of human interaction, exercise and socialization to become a well-adjusted dog.

The Komondor has been primarily used as a guard dog. They guard livestock well, and due to their coat, they are able to blend in with flocks of sheep well. Their independent and dominant nature makes them ideal guard dogs. Now, they are also popular pets.

Strong, confident and courageous, the Komondor is a unique and loyal dog breed. The Komondor is not recommended for first time dog owners. However, they make great pets for experienced dog owners, who can provide them with plenty of exercise, training and affection.